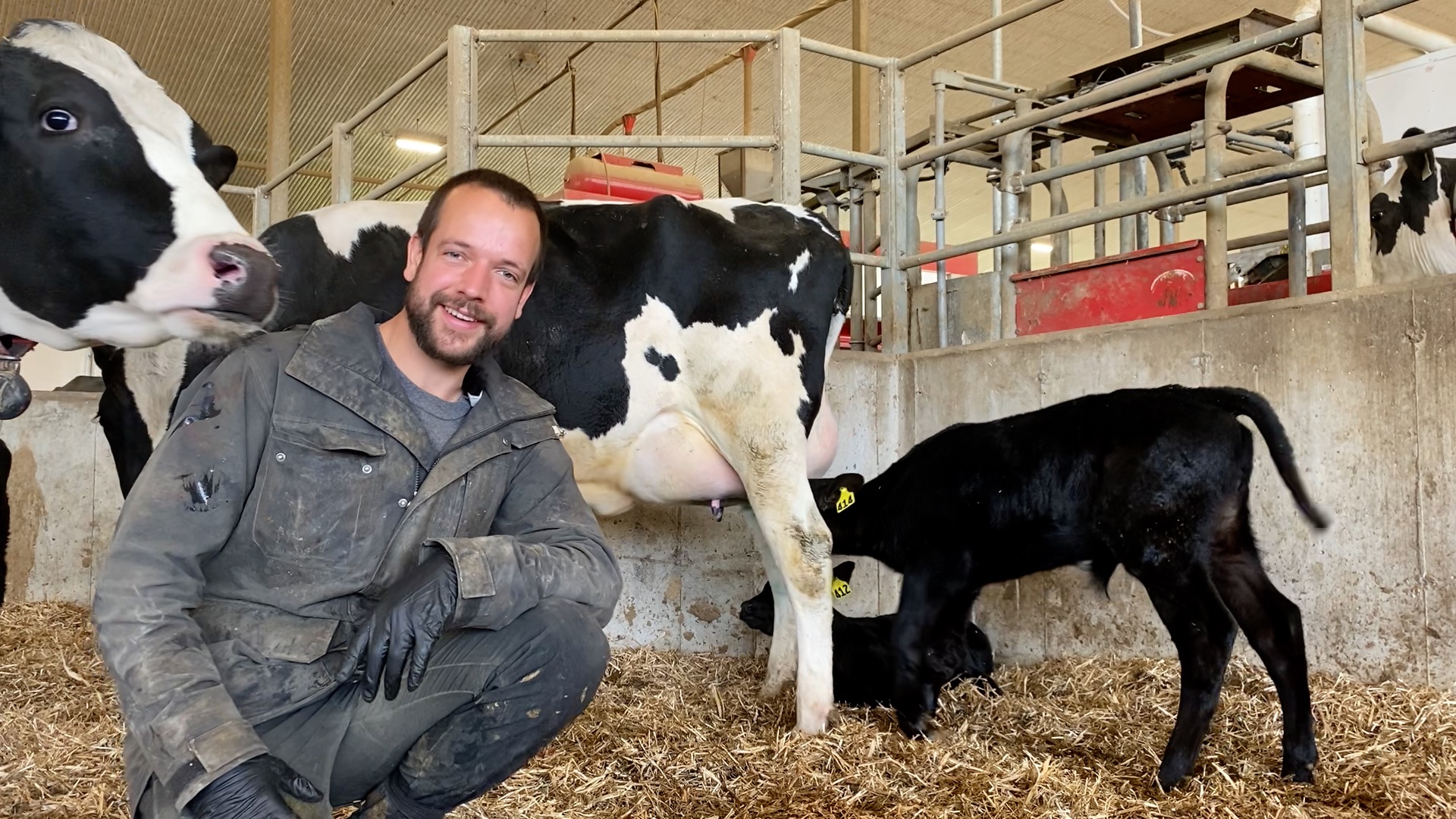 “Turn Moral Eats into an animal sanctuary…” My Response

This article is a copy of my response to the email of a vegan animal activist that wanted to convince me to turn our farm into an animal sanctuary. I know that the opinions of this vegan doesn’t represent the opinions of the vegan community as a whole. In fact, most vegans have been very supportive of the mission of Moral Eats. It is unfortunate how the most extreme voices are always amplified. Vegans have many different reasons for not eating meat. I am not qualified to speak to all of them, but the vegan argument to improving animal welfare is something that I have given a lot of thought.

Like vegans, I truly love animals. I look into their eyes every day and caring and loving them gives me my life’s purpose. During the times when I feel down, all I have to do is give one of my cows a big hug and I feel better. I remember a time when I was about 10 years old when I had saved all of my money to buy two goats from a neighbour. They were very fearful so I went into their pen to try and calm them down and show them they had nothing to be afraid of. The one reached out to nibble my hand and seemed to calm down, but the other one made it’s escape through the gate I had forgotten to close. I was heart broken and didn’t know what to do. Where do you think I went for comfort? Did I call a friend; did I talk to one of my brothers; did I go to my mom for a hug? No, I went to our dairy barn and found my favourite cow in the herd and just laid with her until I felt better. She didn’t mind, because it was something I did more often. About three days later an elderly neighbour called to say there was a goat in her backyard and asked if we knew who it belonged to. Our whole family rushed over and we managed to catch her and put her back the pen with her herd mate. I wanted to share this story with you to help humanize the farmers that raise animals. We are not heartless animal abusers and the horror stories that surface in the media about animal abuse does not represent the industry as a whole. 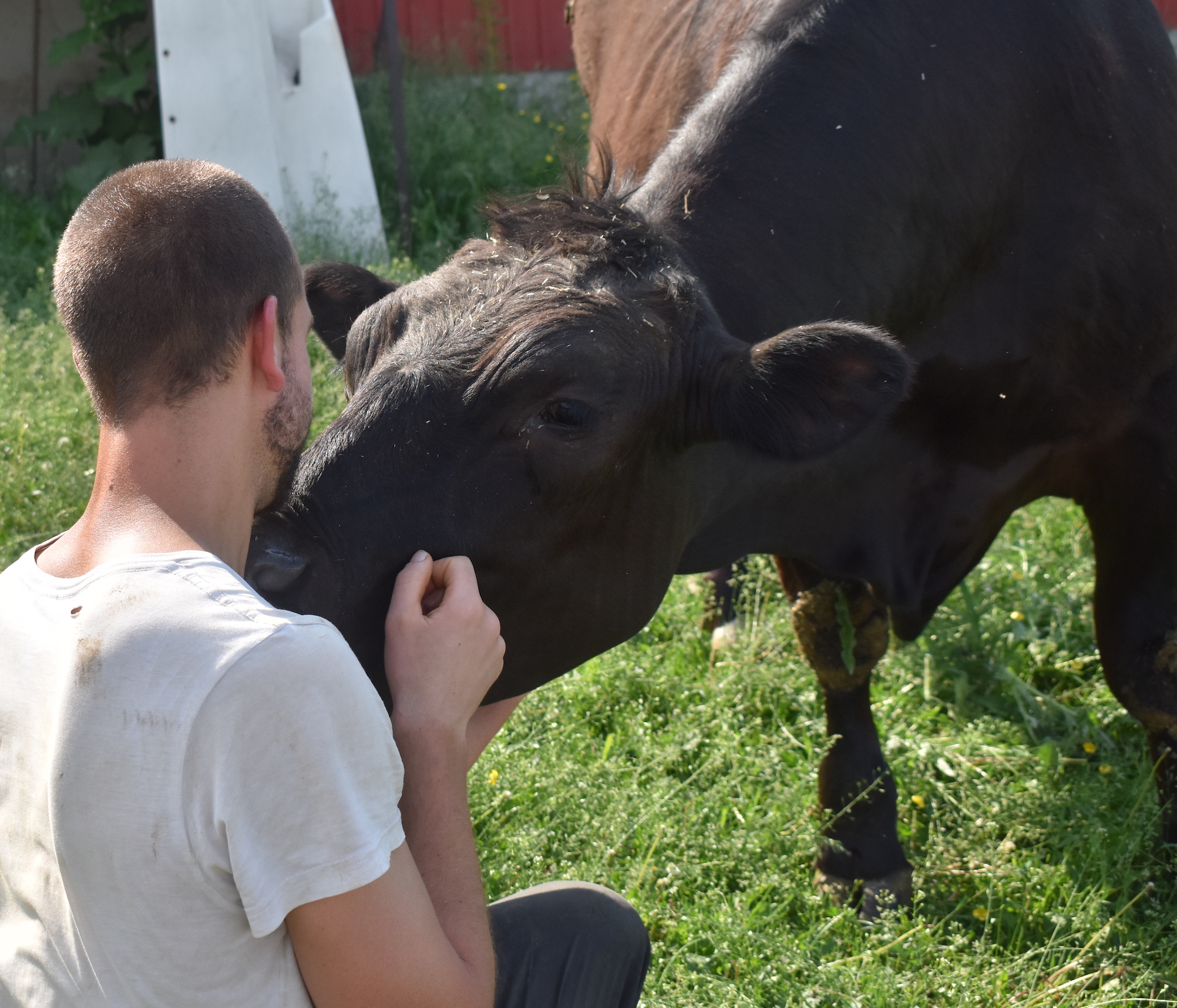 It’s true that these animas are sensitive, loving and feeling creatures. I couldn’t  agree more. Every animal has a unique personality and temperament. Some are brave and aggressive while others are calm and affectionate. They live happy lives filled with countless social interactions, they have moments of satisfaction as they satiate their hunger with fresh feed brought to them by the farmer, they quench their thirst with endless fresh water from a water trough, and they sniff curiously as the farmer walks between them doing his or her daily chores. The farmer gives their animals everything they could possibly want and need. They are protected from the elements, they are protected from predators, they are protected from hunger and thirst, they are protected from disease and discomfort, and they are given everything possible to help them thrive. It is in the best interest of the farmer to take good care of their animals. Granted, agriculture is not perfect. There are cases of animals abuse by farmers and farm hands. There  are even cases of systematic animal suffering. However, the industry is not stagnant. The farms of today are dramatically different from the farms our parents grew up with. They are dramatically different from the farms of 10 years ago. The industry is constantly changing and the standards of animal care are constantly improving. Even without the intervention of Moral Eats, commercial farms will continue to improve animal welfare. Consumers are becoming more interested in how their food is being produced, and they are very clear in what they feel is an acceptable way to produce animal products. Commercial farms are responding to this pressure by finding new ways to produce food responsibly. Farmers are also financially incentivized to improve animal welfare, because the animals respond by living longer and becoming more efficient. Dairy cows produce more milk, beef animals gain weight more efficiently, chickens lay better quality eggs  and all industries require less replacements. However, there will always be variation within each industry. No two farmers care for their animals exactly the same way, not all housing facilities are created equal and, unfortunately, there are still some extreme cases of animal abuse. The point I’m trying to make is that farm animals don’t simply grow up, suffer, and then die. They have a fulfilling life that is constantly improving as management practices improve. The goal of Moral Eats is to be part of the leading edge of that improvement of animal welfare. Moral Eats increases the demand of ethically sourced animal products and incentivizes the innovation and adoption of new moral standards

Life is a balance of joy and suffering.You can’t have one without the other. If there was only joy, life would eventually become boring and it would cease to bring us joy. Look at the group of unhappy children that are born from ultra wealthy parents. They get everything they could possibly want. They never have to work for anything and life eventually feels pointless. There is nothing to look forward to, because they already have everything. Sometimes it is the suffering in life that makes us appreciate the joy. It is the longing for things to get better that makes us look forward to the future. I’m not saying that we should intentionally make others suffer. I’m simply stating that you can’t have one without the other. There is a balance of joy and suffering. It is the Buddhist monks that say life is suffering.

You and everyone else that believes veganism is the best solution to animal suffering are focused on decreasing suffering by eliminating the need for animals to die. I also believe in trying to decrease animal suffering; however, I am more focused on increasing the joy in the animal's life. Unfortunately, in the case of farm animals, they must eventually be consumed in order for there to be a need for them to live in the first place. If there is no animals consumption, then there is no animal life. Both the vegan approach and the ethically sourced approach will decrease suffering, however the vegan approach results in farm animals not needing to live in the first place. Veganism eliminates the death of farm animals but also eliminates all of the potential joy those animal could have experienced.

You asked me to change my farm into an animal sanctuary. I considered the net positive influence that action would have on the lives of farm animals. Unfortunately, there is a very limited number of farm animals that can be supported by charitable donations. There just isn’t anywhere near enough money being donated to animal sanctuaries to support all farm animals. The financial support of these sanctuaries are also dependent on the average person having enough surplus money to donate. What happens during an economic down turn? The average person no longer has money to give to the sanctuaries, and it is the helpless farm animals that ultimately suffer. For a solution to animal suffering to be truly sustainable, it must be profitable. The end result would be a nearly complete extinction of dairy cows, beef cows, pigs, chickens, turkeys and other farm animals. You use emotionally charged language like murder to incite an emotional response. I could use equally emotionally charged language to describe the decimation of several species of farm animals, but I won’t because that only makes people defensive which is not very useful when we are trying to have a discussion. Needles to say, the loss of all farm animals would be truly tragic. It would also be devastating for the individual cow. When I stop to look into the eyes of a cow while I’m scratching her neck and giving her a hug, I think, I am so happy this animal has a purpose to live otherwise I wouldn’t be able to show her the affection she is currently enjoying.

Let me contrast the vegan solution to that of increasing the demand of ethically sourced animal products. Total numbers of farm will stay relatively unchanged,  farm animal suffering will decrease, and farm animal joy will increase. This will happen via the forces of supply and demand. The average consumer will continue going to the supermarket hunting for the best deal to get the lowest prices possible for all their groceries. However, the current trend of growing interest in premium products will continue. The brands that supply these premium products, like local, organic or ethically sourced, will also grow. Moral Eats will grow in proportion to the demand for ethically sourced animal products. Every animal product we sell will directly improves the lives of farm animals, and will increase the demand for more animals to be raised by our moral standards. As these farming practices become more popular and more efficient, average farmers will learn from them and will also adopt more of these practices. Also the more we as consumers and producers talk about raising the standards of animal care, the more the average commercial farmer will realize that it is something of importance, which will influence the way they manage their farms and care for their animals. In these ways the quality of life of all farm animals will improve. In summary, supporting ethically sourced meat will have a much larger net positive affect on animal welfare than having a limited number of animal sanctuaries.

You mention the photo of me bottle feeding a young calf, and expressed your disapproval of veal crates. What you see in the background are calf hutches, not  veal crates. They are a type of housing where we keep young calves for a total of one month together with another calf, not in isolation. After that, the 2 calves move into a larger calf hutch where they stay until they are weaned off milk. In the photo you can see the backs of the hutches which doesn’t show any openings, but the entire front end is wide open. This design is ideal for ventilation and air quality. Calf hutches are considered the gold standard for raising calves, because there is no other housing system that keeps the calves as healthy. That includes leaving them with their mother. I don’t condone veal crates and I don’t believe veal of any kind counts as ethically sourced, because they don’t live to their mature size. I am currently experimenting with keeping calves with their mothers until weaning, because that is the gold standard for ethical calf care, provided that I am able to keep the calves healthy. However, keeping the calves healthy in a large dairy barn with adult cows is not easy. Actually, everyone in the industry believes it is impossible and irresponsible, because it has been tried before. No one has ever been successful. I have been getting some promising results so far so I am convinced it is possible.

I want to be clear about my intentions in responding to your email. I want to stay polite and respectful to your opinions and beliefs and I hope you will do the same for me. I know that I have little chance of convincing you to my point of view; however, I do hope you will have a better understanding of where I come from and why I will continue to follow the path I have chosen. I would like to restate that I know our beliefs are very different, but what we want is very similar. We both deeply love animals and we hope to find a way to give farm animals a better life.